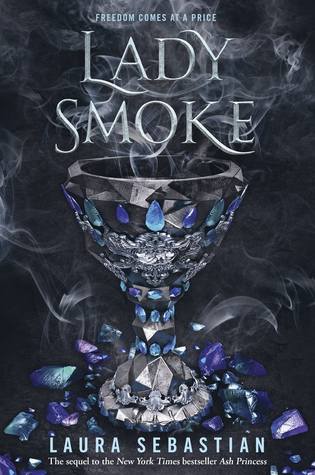 This review of Lady Smoke won’t be spoiler free. Mainly because it’s the second book in a series. But also because I’m really bad at being spoiler free.

“People will believe anything if it makes them think they have more control than they do in the world.”

Have you ever read a book that, in your chest, you knew was kind of bad. And yet, you somehow find yourself really enjoying it. For me, that book is Lady Smoke (Ash Princess too, but obviously that’s not the book I’m reviewing right now).

Lady Smoke continues to follow Princess Theodosia’s journey to taking back her kingdom from the Kalovaxian Kaiser who invaded her kingdom and killed her mother and imprisoned Theodosia. She managed to escape from under the Kaiser’s thumb, convincing his son and heir, Prinz Søren, to run away with her in the process. And then immediately betraying said Prinz. Which, to be fair, is quite a bit better than just killing him like she originally intended. Now she’s looking for a way to take her country back, and she’ll still be looking for that when the book ends 500 pages later. Except this time there’s suitors competing for her hand! Lady Smoke, in my opinion, is a fairly run of the mill YA Fantasy story. Still, there’s something so inherently enjoyable about this series that I can’t seem to put it down.

There’s nothing particularly unique about the writing style for this book. It’s not gorgeously descriptive like The Night Circus or dripping with hilarious personality like Nevernight. In my opinion, it’s fairly standard on all accounts. Still, there’s something about the way that Theodosia’s emotions are written that manages to really resonate with me. Multiple parts of this book and Ash Princess got me choked up, and I think that’s what keeps bringing me back to this series. The book is written in first person which personally isn’t my favorite, though I think suits this story the best.

I also feel like I should mention that there isn’t a whole lot of world building done since this is a second novel. What little there is has very interesting broad strokes, but that’s about it. A lot of the smaller details kept getting thrown in in ways that seemed lazy, which got frustrating.

For me, the characters in this series are pretty hit or miss. Especially when it comes to our main three, it tends to be more miss than anything. My favorite character, by far, is Søren. It makes sense really, I’m such a sucker for royalty and he’s just a good character in my opinion. His arc is the one that sees the most personal growth out of any of our main characters. He goes through quite a bit in this book, but manages to come out a better person at every turn. Overall he’s just very enjoyable to read about. Blaise and Theodosia tend to be a little less enjoyable to read about.

Theo may be the main character of the series, but that doesn’t mean that I don’t find her extremely annoying. She’s extremely indecisive and often times reminds me of a three year old throwing a tantrum until she gets her way. She’s definitely better in this book than the last, but it was still extremely frustrating a lot of the time. Blaise isn’t much better. I swear that boy is whinier than the Sauvignon Blanc I drank last night night. Bad puns aside, it’s not really his fault that I don’t like him. I have a track record of not liking the overly broody and moral guard/best friend turned lover in any book. But also, man I really don’t like Blaise.

Interestingly enough, the side characters in this novel actually outshine the main ones in my eyes. Artemesia is a murder girl with minimal feelings, so of course this means that I love her dearly. We see a lot of growth from her in this novel, and some opening up even. That said, I’m not sure where else we can go with her in the final book so that will be interesting. Her mother, Dragonsbane is an extremely fascinating character as well. At first I thought she was just put in the book to provide more insight into Theo’s mother, but she’s actually turned into a really interesting and nuanced character that I can’t wait to explore more in the next book.

Heron didn’t really see a lot of character growth in this book, but I still love him. He’s just very large and soft and he deserves several snuggles of which he has received zero. If he doesn’t get some happiness in the next book I’ll riot. Ideally, that happiness would come in the form of one (1) Prince Erik. He’s perhaps my favorite of the minor characters, and with good reason. Erik is sassy but still tender, has gone through a lot, and might actually end up having major plot significance in the long run!

I also feel that it’s worth mentioning here that this book has even more LGBTQ+ rep than Ash Princess. We already knew that Heron was gay, but in this book it’s revealed that Erik is bisexual. We also have a female bisexual courtier who is a badass ruler. All of this was excellently done, and didn’t seem to feel forced as LGBTQ+ rep so often tends to.

If I’m being completely honest the plot doesn’t really bring a whole lot of new things to the table. It’s straightforward and tends to stick to tropes, though that doesn’t always have to be a bad thing. However, the plot of Lady Smoke, like the book before it felt pretty flat and predictable. You’re telling me the character that they mention as being cold and ruthless every other page was the cold and ruthless character responsible for assassinating multiple people? Wow, I never could have guessed it! The only part that I didn’t see coming was Cress killing the Kaiser at the very end so she becomes the Kaiserin and sole ruler. This definitely changes things a bit, and I’m excited to see where the plot goes in the final book.

Still, the plot itself is easy to poke holes in, and once you really start to look at things they don’t really make sense. For instance, why on earth wouldn’t the Kaiser’s guard (1) attempt to stop Cress or (2) resist following her after she just killed the king that they’ve served for forever? Or why didn’t Theo and the gang consider creating a rebel army from the get go, it wasn’t like they didn’t know about them from the very beginning. Also, I really feel like Hoa died simply to give Theo a grief plot point and spur her into action which, valid, but also that woman deserved better and we all know it.

I feel so conflicted here. On one hand, the romance might be my favorite part of this series. Yet on the other hand half of this romance is incredibly infuriating. Not to mention the way that Theodosia handles things. She’s constantly using Søren and Blaise’s love for her to manipulate them into doing (or not doing) various things. Which, once you start to think about that, is so messed up. At multiple points she tells each boy that she loves him, sometimes even going as far as to kiss Blaise in front of Søren? Ma’am? No? She’s so confusing that I don’t know which boy she likes, even though the book is written from her POV.

That said, the romance with Søren features my all time favorite romance trope. Enemies to lovers. And, honestly Søren is just so amazing in general it baffles me that Theo would even consider picking Blaise instead. Søren is the one who treats her like a real adult and allows her to make her own decisions and solve her own problems (even though she really doesn’t ever do that). Meanwhile Blaise just attempts to coddle her. So yeah, I’m definitely rooting for her to pick Søren in the last book and also to actually just finally, y’know, pick.

Overall, while Lady Smoke may be a flawed book, I kept finding myself coming back for more. Yes, when you start to really dig at things the book crumbles like Theodosia’s ash crown, but it’s also a really enjoyable read. If you like Red Queen by Victoria Aveyard, you’ll probably like this series as well. For me, its a solid three stars and I’ll definitely end up reading Ember Queen when it comes out in the spring. Until then, I’ll be hoping that Theodosia finally learns how to take responsibility for her actions.