If you read my “Anticipated January 2020 Releases” post, you’ll know that Seven Deadly Shadows was one of my most highly anticipated releases of the month. It appeared to be a book heavily inspired by Japanese culture – in fact it pulls many aspects from the movie Seven Samurai. It even particularly reminded me of Death Note, an anime I watched and enjoyed (at least for the first half). All of these aspects, plus my fascination with Japanese culture made it seem like this book was going to absolutely knock it out of the park for me. I was fortunate to win an ARC in a Goodreads giveaway, which was super exciting! Here was one of my most anticipated reads of the month delivered to me three weeks in advance! Unfortunately, I very quickly realized that the expectation was not going to live up to the reality.

I’ll be honest, I went in to this book with high hopes. Those high hopes were almost immediately dashed. From the start this book felt sub par in terms of voice and writing style. I also never connected with the main protagonist, Kira. And to top it off the plot felt convenient and actually doesn’t match up with the blurb, so that’s fun! Overall I was highly disappointed with this book, which absolutely broke my heart. It did have some redeemable bits though. The main love interest, Shiro, was an interesting character, and the book was chock full of action scenes I loved. Still, those two things weren’t enough to redeem everything I didn’t enjoy in Seven Deadly Shadows. Overall, this book was such a let down for me, but lets go ahead and get into the nitty gritty of why.

Let’s start with the good bits here. Courtney Alameda and Valynne E. Maetani blended their writing styles together seamlessly throughout this story. I wouldn’t have known that this was written by two different people if the cover didn’t tell me. This is incredibly impressive, and really shows their skill as writers. The urban settings of both Tokyo and Kyoto were also incredibly immersive. Personally I sometimes find urban fantasies to be overwhelming as they attempt to imbue magic into real cities, but that was one issue that Seven Deadly Shadows did not face. The authors also did a good job of weaving in the Japanese mythology, and doing so in a way that didn’t feel like an overwhelming information dump that broke the immersion. Unfortunately, that’s where the good bits end.

This book is written in first person, which is already a major turn off for me. On top of that, something just felt a little off to me regarding the writing. There were several weird comparisons, such as “Her patella bones looked like birds’ skulls, white and fragile.” which is something that Kira says about a girl who is bullying her. It doesn’t add anything to the interaction, but it did make me pause and wonder why it was included for a few minutes. There were also several times that the dialog was clunky and weird, which detracted from the story. Overall, Kira’s voice just felt extremely childish, which I’ll get into more when I discuss her as a character later, but that made it incredibly tiresome to read the book at times.

As I mentioned before, Shiro was probably my favorite character. He is the kitsune guardian of the Fujikawa family shrine, and also Kira’s love interest. While he does end up feeling like a plot device more than a person several times throughout the book, he still manages to the steal the show in most of the scenes he’s in. He’s witty and kind and more than willing to help Kira in any situation. Plus, his characterization is one that felt the most consistent throughout the book. The shinigami on the other hand, were anything but consistent. While some are willing to work with Kira and Shiro from the beginning, others started out against them. Until midway through the book and they just decide to change their mind for seemingly no reason.

Kira was hands down my least favorite character, and considering that she’s the protagonist, is probably why I didn’t like this book. She starts out as the typical early 2010’s angsty YA protagonist, very much a girl of the “my life is hard and nobody understands me” mentality. I had hope though, because as the first half of the book progressed she seemed to improve and become more and more likable. Until she has this bizarre confrontation with the bullies from earlier in the story and goes positively unhinged. She starts talking about enjoying watching one of the girls crying, which is pretty intense for a sixteen year old girl, and from then on her character is about as consistent as a roulette wheel. She oscillates back and forth between insecure and overconfident so quickly that it’ll give anyone whiplash. Overall, she effectively ruined this book for me.

OK, I stand corrected from my last statement. The plot is what ruined this book for me. It had so much potential, but instead was just a series of disappointments. I understand that writing a standalone fantasy novel can be difficult. There’s a lot to explore and not a lot of ground to do so. Unfortunately, this book’s solution to that was to make everything as convenient as possible. At every turn there seemed to be a solution conveniently offered to any problem that Kira faced, and most of the time in a way that didn’t seem consistent with the rest of the story. In the end, that just left me confused and annoyed.

What really bothered me though, was how misleading the title and the blurb are. The book is called Seven Deadly Shadows. The blurb mentions Kira enlisting seven shinigami. All signs point to there being, well, seven shinigami in this book. Imagine my surprise when there ended up only ever being six! Even though finding and working with seven shinigami is crucial to the plot, it never actually ends up happening. This might seem like something super minor to get upset about, but for some reason this really bothered me. I waited so long to see who the last shinigami would be and how they would find them, just to be given a cop out at the end.

In case you haven’t been able to tell throughout the course of this review, I was so sad by how much this book disappointed me. Nothing is worse than having a book you expect to be a five star read be the exact opposite of that. Well, not exact opposite. It wasn’t bad enough to warrant a one star rating, thank god. Still, this feels like a massive case of wasted potential which absolutely breaks my heart.

While Seven Deadly Shadows wasn’t a good fit for me, that doesn’t mean that others wont enjoy the book. It definitely felt targeted at the younger YA readers, which is perhaps why I didn’t enjoy it as much. Either way, I’ll instead turn to other Japanese inspired fantasy books – I’m looking at you Shadow of the Fox – and hope that they can fill the hole this book left. Until then, I’ll just be rewatching the first 24 episodes of Death Note, because this book made me miss Ryuk.

Check out our other reviews! 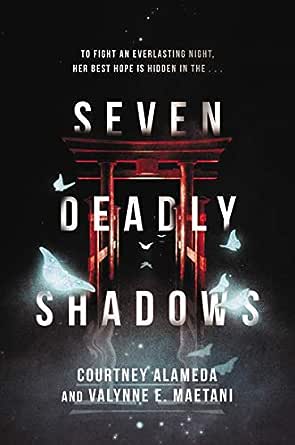