I think there’s no other genre quite like fantasy. It’s fun to get swept up in the worlds and lost in the stories. Nowadays we have authors that are challenging what is considered “traditional fantasy,” not relying on the medieval, European lore the genre was built on. They instead bring to the table parts of our world and history that we might not be familiar with.

R.F. Kuang’s The Poppy War is based on Chinese history, specifically China’s war with Imperial Japan during World War II. This foundation for a fantasy novel immediately caught my attention, and after a while of listening to people non-stop recommend and praise the book, I decided to give it a read myself. Here’s my review for The Poppy War!

The Poppy War is a story about a girl named Rin living in the Empire of Nikan. She’s born into a rural, impoverished part of the nation, and throughout the book we get to see her struggle to overcome the hand she was dealt.

Rin’s development is intense from the very beginning. Kuang doesn’t let her main heroine breathe for even a second. Rin is always facing some sort of adversity and is challenged to make almost impossible decisions. She does many things throughout the book that make me question just how much I like her, and you see her wrestle with these decisions ultimately trying to do what she thinks is right.

Throughout my reading, the story of The Poppy War felt very familiar. It utilized tropes that I’m used to seeing in other novels, such as having Rin attend an academy where she is clearly an outcast due to her origins. This familiarity was never detrimental to my experience, though. The plot took many unexpected turns and never felt predictable. In fact, I’d say this book accomplishes some of the best execution of the tropes it uses that I’ve ever seen.

After some thought, the pacing of the book was also very satisfying to me. A lesser novel would have spent too long on scenes where Rin is working to accomplish her current goal, whether that be studying for the Keju placement exam or trying to become a successful student at the Sinegard academy. Kuang provides just enough to make sure we spend adequate time with Rin at each point in her life before moving on to the next. It was jarring at first, to see two years of Rin studying for the exam flash by in a couple of pages, but this story goes beyond Rin’s struggles with the exam, and it wants you to know that.

Now, let’s talk about the world of The Poppy War. War-torn with tensions high between the neighboring empire, Nikan feels like one of the most beautifully crafted bleak settings for a novel. Kuang does a brilliant job of utilizing Chinese history to create a world that feels so grounded and provide descriptions that are horrifyingly real. Details that had been lifted from historical texts feel right at home in the world of The Poppy War, so much so, in fact, that I was horrified to find out how much of the details were based on real life. It gets very dark at times and you should probably know that before going in. Click here for a list of trigger warnings.

I can’t finish off this review without discussing the magic in the book. The Poppy War introduces the reader to Shamanism, or communion with the gods. Many other first novels in a trilogy will give only a hint at the magic of the world, but not The Poppy War. Shamanism is displayed prominently within the book’s worldbuilding, characters, and plot. Kuang does as great a job of writing about the abstract and spiritual side of her magic as she does writing the harsh and bitter consequences of it, and I personally love to see all of it.

It’s not often that a book captures my attention so completely. I thought about the book constantly when I wasn’t able to read it, and when I was able to read it I had a hard time putting it down. More than anything, it was just so refreshing to read this book.

The Poppy War is without a doubt one of my new favorite books. From what I’ve heard the sequel is even better, so I’m excited to jump into it as soon as I can!

Check out some of our other reviews! 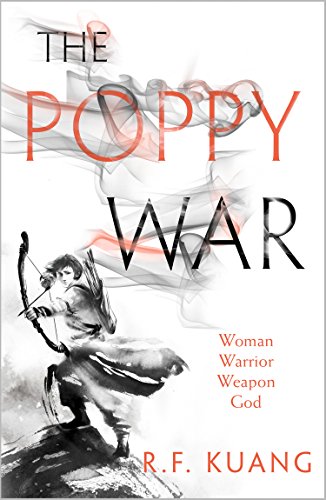